Here are my final projects for the last few days of the Papertrey Ink anniversary festivities/challenges.

2013:
I surprisingly don't have many stamp sets released from this year. I don't own any of the featured sets, so I went with an inspiration challenge instead. I took the colours from this lovely card by Cristina Kowalczyk and used them with one of the 2013 sets I own- Sketched Shapes. I thought the circle graphic combined with the somewhat masculine colour scheme made a great clean and simple birthday card! 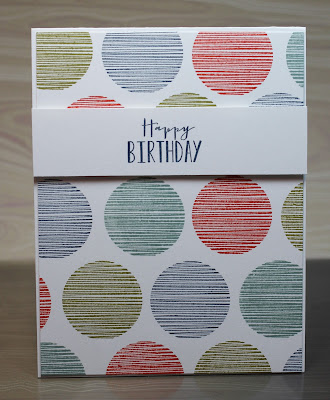 2014:
I have a lot of favorites from this year. I actually only recently purchased Embellished Elegance and haven't used it much. I started by die-cutting out the word happy. I wanted to do some ombre stamping, but I wasn't sure yet where I was going with it. So I stamped a blue version and then a purple version. I liked them both so much that I had to make two cards!

To make the background I placed several of the leaf and floral images on one block and then stamped it in tone on tone all over the main background panel. For the blue one, I made it a wedding card by white embossing the "wedding day" sentiment onto Dark Indigo. For the purple one, I made it an anniversary card by white embossing the "anniversary" sentiment onto Royal Velvet. I have to say, I really like how simple, yet intricate these two turned out. Definitely could see myself making a whole big batch in other colours! 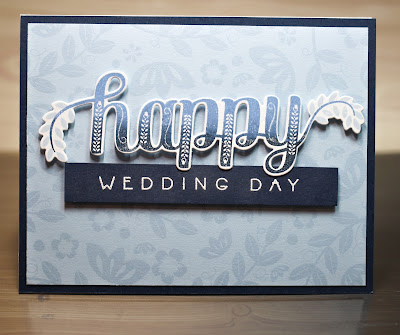 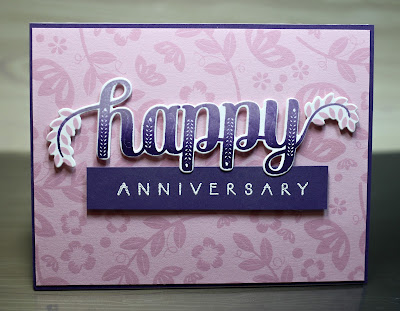 This was another year where I don't have that many sets. The ones I do have are more Christmas-themed. I was going to just make a Christmas card, but once I started I realized that I could make it into a masculine birthday card. I used this card by Laurie Willison as my inspiration. Because of the curved stitched die that I have, I flipped it.

I started this card with the Spring Moss panel. I die cut the edge and then stamped one of the sprig images from Spruce and Sprigs on there. Next I stamped several other sprigs onto white cardstock and starting the task of fussy cutting them out (why didn't I get these coordinating dies???). Once that was all done and I finally settled on an arrangement, I added a little wooden button with some baker's twine. The sentiment is a combination of 2 other 2015 sets- Scribbled Sentiments and Keep It Simple: Birthday II. 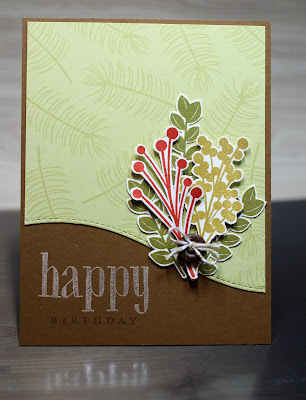 I actually have quite a few 2016 sets, but none of the ones that I own were featured today. So what started out as inspiration challenge from this card by Laurie Willison...turned into inspiration from a 2017 project by Lizzie Jones. I guess that's how inspiration works though, I was going to use the layout from Laurie's card, but I really wanted to use the Tropics set and I remembered loving the colours from Lizzie's Palm Prints card. I added a sentiment from 2015's Good Times set. I got the dies for this set a long time ago and only finally got the coordinating stamps. Sure glad I did though!

For the leaves, I did lots of rocking and rolling with my inks. For this technique, I ink up the lighter colour first, then ink up the edges of the dark colour, but to ensure there's a smooth transition of colours, I gently tap the lighter ink over the whole thing right before stamping it. If you find that some of the darker ink transfers to the ink pad, just stamp the ink pad directly to paper a few times once you're done to get any of the darker ink off. 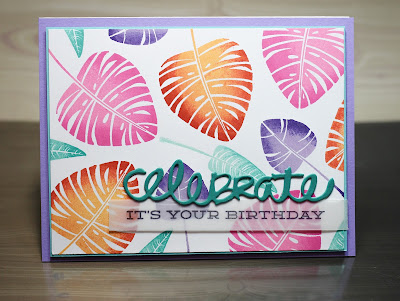 And finally, here are all the projects from the last 10 days!  18 cards total- not to shabby! 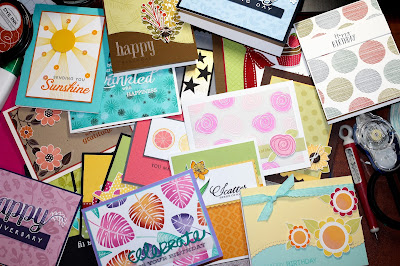