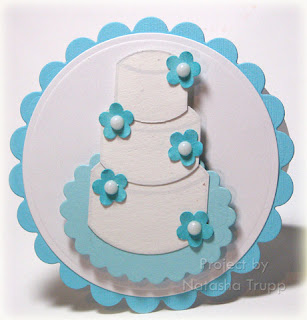 When I was at Michaels this past week, I kept passing by these delightful cake stickers by Martha Stewart Crafts. The price here- 6.99! Not like I'd buy a sticker without trying to recreate it first, but still. This meant that I had a challenge for myself- to make a tiered cake. I thought about doing it all free-hand. Instead, I started with some oval dies. I cut out 3 ovals in confetti white paper. To make them cake-like, I snipped off a 1/4'' from each side. Next, I took a bigger oval, and used it to trace a curved shadow at the top of each layer. I also outlined each layer with the grey marker while I was at it. I attached the 3 tiers, then punched out some flowers from this year's punch kit. I sponged them to make them a little darker than the cool caribbean scalloped plate I had set the cake on. Then, I attached some gelly gems in the centers. The card base was made using a regular card base and the largest circle nestability. When doing that, be sure to not completely have the die cut on the paper, you need to have some over the fold so that you don't just end up with 2 circles. The scalloped layer is the largest scalloped circle nestability, so if you were to turn the card over, you'd see that this layer is larger than the actual card.

Email ThisBlogThis!Share to TwitterShare to FacebookShare to Pinterest
Labels: nestabilities