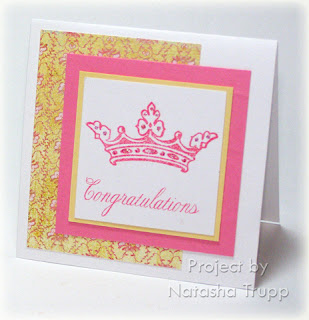 When you're not feeling ultra creative, these little 3x3 notes work out really well. I sketched out a few layouts that work on such a small scale, and thought that the crowns from the Mardi Gras would look great in this layout. I chose some Basic Grey papers first and matched my colours from there. For the first one, I used the new Two Scoops 6x6 pad, drawing out Regal Rose and Barely Banana. I also added a little bit of stickles to the crown.

For the second card, I used some paper from the Mellow 6x6 pad. I drew out the Cranberry 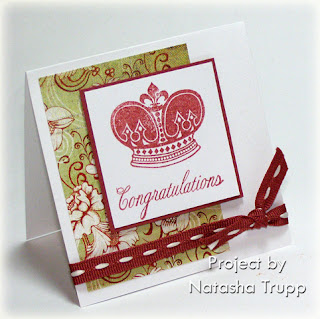 Crisp from it. I thought about doing Mellow Moss as well, but I wanted to show more of the background since it wasn't as repetitive as the Two Scoops one.
Generally doing these small note cards is a great "warm-up" activity. Or if you're not feeling too creative, it's a little something that can be useful in the future. You never know when you want to add on a little note to a hostess gift, flowers, or something like that.
Supplies:
Stamps: Mardi Gras, Flourished Words
Inks: Regal Rose, Cranberry Crisp
Paper: Basic Grey (two scoops, mellow), Regal Rose, Barely Banana, Cranberry Crisp, White
Accessories, etc.: Fruit Punch stickles, pop dots, cranberry stitched grosgrain
Posted by Natasha at 11:34 AM

Email ThisBlogThis!Share to TwitterShare to FacebookShare to Pinterest
Labels: flourishes