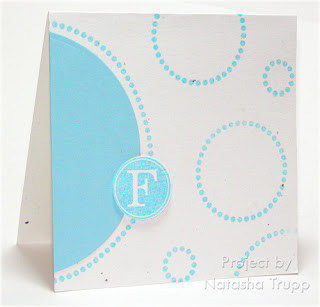 I got home late Thursday night. CHA went well! However, the cold that I was fighting while there is back with a vengeance. So despite having access to all my craft supplies again, I just haven't had the energy or motivation to do much. I put together this simple monogram card using gel-a-tins Monogram Alphabet and circles from You Spin Me Round. I thought the soft tones of the Cool Caribbean would be nice on the Confetti White cardstock. The large circle was cut out with a nestability circle die. The letter image is popped up with a pop dot.

Email ThisBlogThis!Share to TwitterShare to FacebookShare to Pinterest
Labels: gelatins