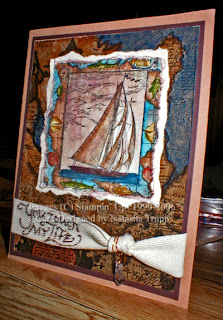 I haven't been able to find a nice map stamp. For now, I found a nice alternative, printing detailed brushes from Photoshop Elements onto acetate. The background you see on this card was found here: http://scully7491.deviantart.com. I printed it, then sponged some acrylic paint on the backside, then ran it through the xyron, and pasted it to some aged brown paper. Yes, a stamp would've been easier, but this works for now. Then I set about colouring the sailboat image to match nicely with the map. I stamped the saying on the twill tape. It wasn't as dark as I had hoped, so I carefully went over it with a marker. It actually worked better than I expected. The little dangling charm is a shrink art sailboat. Ideally, a metallic anchor charm attached with a jump ring would've been great on this card, but I don't have any of those. I saw a few in Victoria, but they were over a $1.00 each. Not exactly cost effective.
Posted by Natasha at 3:36 PM