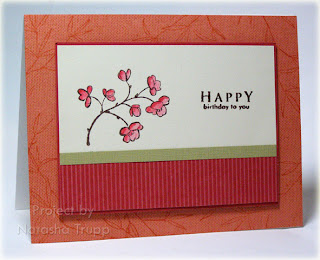 I decided to deviate from that one layout for my "assignment" to another go-to style I often use. I was going to make two of the same cards, but there were little things I didn't quite like with the first one. For instance, I would rather have River Rock ribbon on this one, but I do not have any. I went with a strip of river rock textured paper instead. The card works, but I just wasn't loving it.

So I made little changes for the second card. Instead of using the striped side of the DP, I used the floral side. It's busier and packs way more of a visual punch. I increased the ruby red mat by about 1/8''. I stamped the branch to make it seem as though it was growing onto the paper, instead of floating. I also went with a bigger, 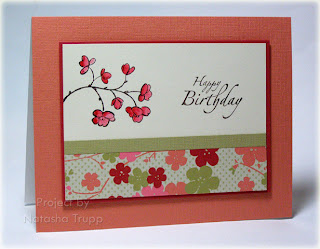