Two days ago I received notice that a project was accepted into the Papercrafts Holiday Special!! Then today, I received a notice from Cards, they have also picked up a project! And here I was thinking they'd never even received my submission!

Here are some quick cards I threw together 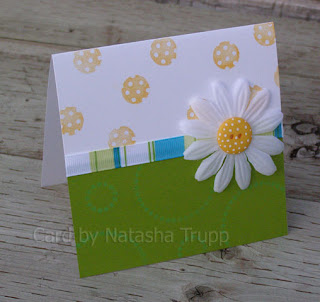 these past 2 days. I finally picked up some decorative flowers for my cards. I had been eyeing these daisies for a while now. Finally I picked them up. I had been really wanting to pair one of my polka dot buttons with a daisy, so that's exactly what I did! As I learned on this card, it's better to use dye inks for the tone on tone stamping look. After the green galore ink had dried for a day it got this weird look. Serves me right for being too lazy to go downstairs and get the green galore dye ink pad! 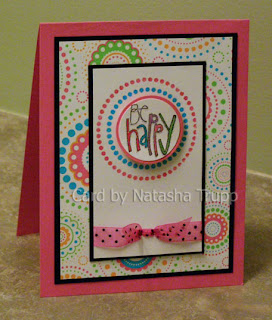 My other creation is another bright and fun creation. My local Michaels FINALLY had the studio g clear stamps, so I picked them up. I really like the look of colouring the line art letters all different colours and then glitterfying it. I got that idea from Emily's ATC that I received as part of a special swap. The "you spin me round" set by gelatins worked nicely to outline the punched out image. And it just so happened to match this awesome Doodlebug paper I had picked up last weekend. I decided that the best layout to showcase the small round sentiment was one of my favorite layouts. It just works when other stuff won't!
And in non-stamping news, the tulips are ALMOST ready to open. There are about 3 or 4 that should open tomorrow as long as it's a sunny day, which it's supposed to be. I hope to take some good pictures once I'm home from work tomorrow!
Posted by Natasha at 9:04 PM