I was going to update last night, but my keyboard became possessed. Seriously, it would only type backwards. One of the arrow keys was jammed, so as soon as I typed anything, it would jump back a space, thus, backwards text. It made it very hard to even log into blogger to moderate comments, nevermind an update, lol!

Anyway, it's all good now. Here's a card I made. I 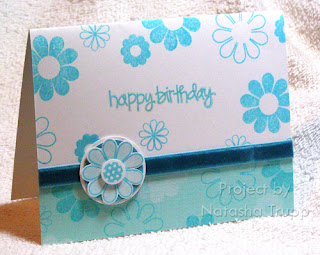 was feeling in mood for some Caribbean colour scheme. I actually used some Bazzill cardstock that is nearly the same tone as Cool Caribbean, but it's textured. I stamped it with the various flowers from beautiful blooms in Caribbean and White. I had this cut piece of velvet ribbon laying around, so that too got placed on the card. A couple notes about punches and these flowers: the dotted center fits nicely in the 1/2 punch. So if you screwed up and didn't get it centered (like me...) stamp another, punch it out, and attach with tape or a pop dot! The large 9-petalled flowers will just fit in the 1-3/8 circle punch. I cut mine out and mounted it on the circle instead. The birthday greeting on here is from the second batch of Studio G $1.50 clear stamps. The ink kept pilling, so I stamped it in versamark then in caribbean. That seemed to solve things. Ah, the differences between acrylic and photopolymer!
Posted by Natasha at 7:26 PM