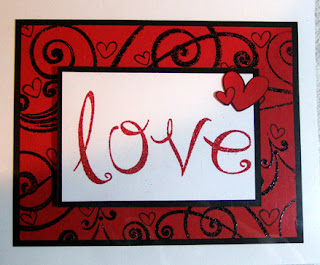 Here are a few more designs I did. I was having fun with the red and black theme. I just LOVE this alphabet set: Pretty Fancy Letters. I put it with the some hearts from Pet Shop, as well as Hearts-a-Flutter. The swirls are from Spiral Symphony. I embossed them with the jet black super glitter. It sure sparkles in real life! The letters were also embossed with the ruby red slippers super glitter.

For this next one, I was just having fun with symmetric designs. This card uses the Wallpaper Series #2. Both of the Wallpaper sets would be awesome for making very cool designer paper. 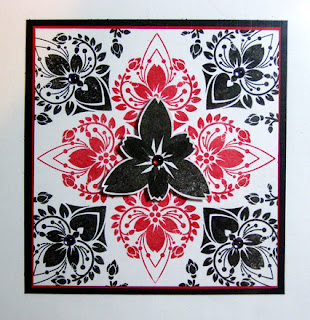 I picked up some flocking powder, so I was thinking of using that later for some very cool effects. I finished off this design with a few of the gelly gems, I used the gems from the Dazzle Me set. The final layer of the card is the black frame, I had already mounted the cardfront on some white 12x12 for transportation.
And, now it's time for the Tagging. The 7 random facts seems to have come around again (I last did it on April 25th), so I guess I will just have to come up with 7 more items!
1) I HATE having wet eyebrows, it is a severe pet peeve of mine. They are the first thing I dry out of the shower.
2) My music playlist is only 37 hours right now, and I'm thinking, it needs more songs!!
3) I love going to check the mail. I know it's really lame, but sometimes that walk to the superboxes is the highlight of my day. Hey, you never know what could be in there!
4) I like making up ridiculous "nicknames" for people that end up being excessively long. Like I've called my brother Tubana Banana Cabana Boy (say that 5 times, fast!), and my sister "Tee Tee Bo Gee Gee".
5) I was a Sims 1 player, but I have moved on to the Sims 2. I love designing the houses!
6) Speaking of houses, when I entered university, I had every intention of becoming an architect, but the prof. of my intro class completely turned me off from that path. So I ended up in Geography, which I had only picked up because I needed a 6-hour credit course to fill in for French, which I had dropped.
7) I haven't yet placed an order from the SU! new catalog!<
Posted by Natasha at 3:13 PM