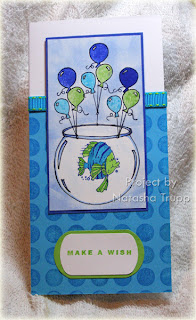 I decided it was time for some doodling on my card. This was for another SCS challenge. I started with the fish, but I wanted to make it more interesting. At first I was just going to add balloons to the fish, but then how would he breath! So I drew a fishbowl around him and attached the balloons to that. I never liked how the balloons in Hip Hip Hooray were a solid stamp in a set of line-art. So after stamping, I outlined them. The sentiment just seemed appropriate with the theme :D I sponged the sky after doing all the stamping and colouring. I masked the objects so I wouldn't get them too muddied up.
Posted by Natasha at 2:56 PM