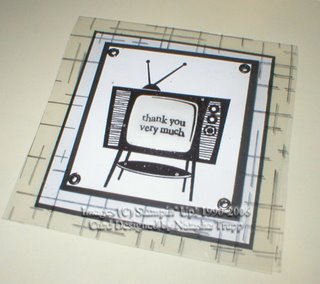 I tried this concept before, but it went horribly wrong. See, then I didn't know that crystal effects was waterbased. So, if you attempt to glaze over dye ink, guess what, you'll get some serious bleeding issues. Anyway, since the Thursday challenge was to use Crystal Effects, I decided to try this out again. This time, I embossed the TV image, as well as the message I placed on screen. The only problem was the long drying time of the glaze. It takes a while, and you know , when you have an idea, you want it done. Moral of the story, don't consider putting eyelets on a card where you should let key components dry for over an hour, at least, not until that hour is up. I salvaged it however by setting the eyelets with 3/4 of the card hanging off of my table.

In other news, after much hair pulling and frustration, I personalized my page. I had no problem creating the banner, took all of 5 minutes. However, figuring out exactly where to place the image source into the html code, and overcoming some of the more annoying blogger 'blips' was not my idea of a super time. I hope you like the sandy, beachy feel to it. Although, now that I have my base template, I will likely change it frequently :D
Posted by Natasha at 11:53 PM